I wasn’t even supposed to be on the flight. I was a standby, far down the list. But after hours of praying, with only minutes before the gate was closed, we were given seats on the plane.

I was aware we would be the last passengers boarding and we would have to take whatever seat we were given. But I was so grateful not to be sleeping overnight in an airport while my baggage traveled without me I was willing to sit anywhere.

Until I got to my seat.

And there she was — my seat mate.

She was everything opposite of me. She was in her 80’s, if not her 90’s. She was Iranian and spoke no English. She was old and unable to get around well, requiring assistance to get on and off the airplane. 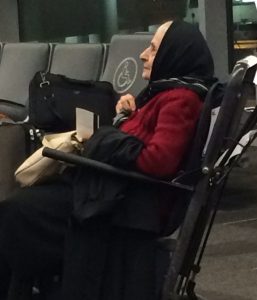 She was sitting in the aisle seat and I was assigned the middle seat. She was unable to stand to let me pass, so I tried carefully to crawl across as gently as possible. Which is impossible in the small spaces of an airplane.

As our flight began, she was viewed as the unwanted “difficult passenger” by the flight crew. They were inconvenienced by her outstretched leg into the aisle and her inability to communicate. They avoided her when possible.

I, too, found myself inconvenienced, grumbling on the inside with the realization of not being able to get up during the 4 1/2 hour flight. Oh, sure I could crawl across this poor lady again, but it was a feat I didn’t desire to repeat.

I was annoyed when she hung her purse over the back of the seat making it impossible to use her tray table for her drink and snack.

I was downright angry when she spilled hot tea down my leg because she couldn’t use said tray table.

My heart was hard and closed off to this lady, viewing her as a nuisance to my flight.

And then something beautiful happened.

As she struggled to open the foil wrapper of her pretzels, I saw for the first time a sweet lady whose body betrayed her by the age and ailments it carried.

A sweet spirit rested on my heart and I began to see her as one of God’s special creations. My heart of stone was turned to flesh.

She was someone’s precious grandmother. And if they loved her half as much as I love my grandmother, they would be heartbroken to watch how she struggled with a simple task and no one to help.

So, I asked if I could help. She didn’t understand my words, but she understood my intentions. With an unsteady hand she reached out and gave me the packet.

With the simple act of opening a foil pouch of pretzels, my heart was full. I was blessed, not because I was able to show kindness to someone labeled unwanted, different, and a burden, though certainly I found joy in helping, but because God used this little lady to teach me.

He showed me where I still stand in judgement toward others, placing them in categories based on my perception of their value.

He spoke to my heart and asked me to stop looking at His children through the eyes of my flesh, but rather see them as the special, unique individual He created – loved enough to die for.

It is so easy to view people as distractions – obstacles – in the way of our rushed daily agenda. But God wants us to be purposeful, intentional at seeing each individual as a soul in need of His sacrifice and gift.

I pray my experience will challenge you to slow your pace, step back and look – look for a chance to be His hands and feet for one of His precious children.