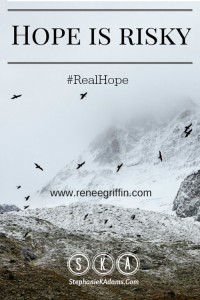 Hope Is Risky–You Can Fall On Me

I heard the cries of the little one. His pleas triggered my inner mama alarm; I knew he’d gotten himself in a pickle, again.

He never appeared to be daunted by risk. Climbing up my grandparent’s old, iron bed was simply another mountain needing to be conquered. He was around two when he screamed for help from the bedroom where he and his big brother, age four, almost 5 were playing.

He’d risked the climb, but had no plan for descent.

As I approached the door, his cries tapered off, and I heard the soothing voice of his brother.

Slowly without attracting their attention, I took a peek into the room.

My first born son was laying on the floor beside the bed, arms spread wide, offering up his body as a safety net.

Seeing my precious one presenting his own little frame as a sacrificial gift to his baby brother wrecked me.

Even with the calming assurances from his brother, he still wouldn’t budge. My little climber didn’t want to take a chance of getting hurt on the way down.

In Matthew 1:18-25, scripture tells the story of another person facing uncertainty. His name was Joseph.

Joseph was pledged to be married to a young girl named Mary. Before their marriage took place, news of Mary’s pregnancy reached Joseph’s ears, and he knew he was not the father.

He settled on the lesser of the two and decided to divorce Mary quietly, but before he moved forward with his plans, an angel visited Joseph in his dreams and proposed an unthinkable 3rd option.

It was risky, wild, incredible.

She’s carrying Immanuel, and the Holy Spirit is responsible.

The angel of the Lord gave him the entire plan.

This is what’s about to go down, and here is your part, so let’s do this thing.

Don’t be afraid; this will be amazing.

Trust me and watch how this changes the world.

Yet, even with clear instructions from an unmistakable source, the decision carried a personal cost.

What would people say?

Would Joseph’s reputation be forever tarnished?

The potential perils Joseph faced were real, no doubt, but his choice to obey God regardless was a hinge upon which the plan for Jesus’ birth would turn.

What if he’d said no?

What if he’d allowed Mary to be stoned?

We know God’s plan couldn’t have been changed, because it was set by Him before the foundation of the world, but simply consider how different the landscape of Joseph’s history could have looked if he had played it safe.

Instead of witnessing the birth of Jesus and all the many miraculous events to follow, like three wise men coming to worship in the stable, Joseph could have been in his normal life, patting himself on the back for ending the life of a tainted girl with sighs of relief over dodging a bullet. 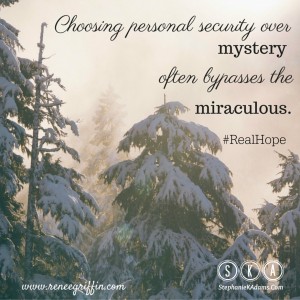 The Christmas miracle recorded in scripture began with a normal, ordinary man saying yes to an uncertain future.

That same God calls to His children today from the pages of His Word, and sometimes it feels uncertain, improbable, unlikely.

Obedience may look like risk, but it’s actually the safest place we can be.

Like my sweet, selfless little boy, lying on the ground, willing to take any pain his brother’s precarious maneuver might incur, when Jesus calls us to step out, untethered for His purposes, He is already ahead of us, waiting, arms spread open wide beckoning with certainty, “You can fall on Me.” 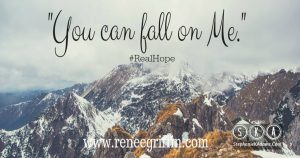 Joseph’s obedience spoke volumes as he sacrificed an average life for a chance of a lifetime.

May we all take a lesson from Joseph and not miss the miracles God has in store. Let’s step out of our easy, normal lives and venture out onto the faithful edge knowing the One Who created us, holds us, and provided His Son. Born in a wooden manger, one day Jesus would stretch His arms wide on a wooden cross allowing the sins of the world to fall on Him bringing us Hope. He is so worthy.

What is He calling you to risk?

Thank you to Renee Griffin for contributing this article to the #RealHope series. Renee Griffin writes for her blog, ReneeGriffin.com.

She is also a contributing writer at LifeLetter Cafe.

This article is part of the #RealHope blog series and Hope Is Holiday Devotional Study.

For information regarding our current and future studies, visit our Bible study page.

Share this:
The Christmas miracle recorded in scripture began with a normal, ordinary man saying yes to an uncertain future. That same God calls to His children today from the pages of His Word, and sometimes it feels uncertain, improbable, unlikely. Obedience may look like risk, but it’s actually the safest place we can be.