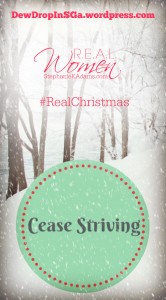 Growing up, I can remember knowing my very young mother felt compelled to prove to a harsh and judgmental world that she could be the mother everyone seemed to doubt her capable of being.

The compulsion created a pressure, whether perceived or real, in me to perform, to help my mother to show the world she would not be defeated, that she could accomplish what no one seemed to think she could.

It was like honey for my soul, as people would acknowledge my hard work, my “perfect” behavior, my conformity…

Soon, the voice driving me was less from my mother, less an effort to prove anything on her behalf and more loudly bellowing from within.

Thundering from inside, my voice telling me I had to do it all, prove to the imposing world I could do it, that I had it all together, and my life was a flawless stream of perfection.

I wasn’t good enough in my own mind, so I was driven to prove myself wrong.

Add in the pressures of a commercialized Christmas to the mix, and my perfectly groomed gingerbread house comes crumbling down. Something had to change.

Through my relationship with Jesus, I began to find freedom and actual joy in who I am, as a new creation. I found peace in Whose I am. I began to trust the truth of me being enough, and more importantly He is enough. That quieted the demanding shouts of that same imposing world.

The demanding and critical voice inside my head urging me to perform, perform, perform, quieted. It was through relationship with Jesus, the grace and the mercy and the beautiful love He showered on me, I discovered I don’t have to prove anything to anyone. My validation comes from Him.

So when I visited the retail giant this year in July (July?! Really?!), when the stores started inundating us with all their Christmas wares, taunting the recovering type-A control freak perfectionist in me, urging me to forget Who I belong to, tempting me to see the waves instead of the Savior, I had to reset my focus.

Looking around, it’s so easy to be consumed by the demands this world urges me to grab on to relating to this blessed season, which has been hijacked by the compulsion to prove something; that I’ve hosted the best parties, prepared the yummiest food, purchased the greatest gifts, strung up the most beautiful decorations, found the ugliest sweaters, created the most creative crafts, shared the wittiest elf-on-a-shelfisms (what in the world?!) Social media would have me believe I am failing and don’t measure up.

Christmas is not about any of that. These temptations and pressures threatening to overwhelm me, infringe on something so precious, so vital, so integral.

It struck me, as I watched “How the Grinch Stole Christmas” and this was said of the Grinch’s thoughts (and I quote),

Dr. Seuss was on to something. Christmas means a WHOLE LOT MORE.

Christmas is a time when believers celebrate the most precious gift ever received. It’s a time of remembering the time, the perfect place in history, where God chose to leave all the splendors of heaven, to step away from the choirs of angels praising His name, to wrap Himself in flesh and dwell among us.

Love came down from Heaven in the form in a tiny package, as a gift to the world.

How on earth have we made it about any other gift, since no other gift could possibly come close to comparing to that first Christmas gift?

How on earth have we made it about decorations and elves? How have we lost our focus?

It was when I heard that translation of a familiar verse, I stopped in my tracks. Cease striving.

I can’t prove to Him my worth. I will fall short every time, but the wonderful, grace-filled news is I don’t have to. He gave me the gift of Himself freely. All I have to do is accept it, receive His gift. I just have to receive Him. I just need to know that He is God.

I can cease striving, stop trying to prove to the world, to myself, to God, to be anything more than I am. He knows who I am, and He loves me enough to leave heaven and prove it.

This season, I plan to cease striving and just know Him, resting in joy.

Jennifer New is a former weather blogger who has since fallen in love with Jesus.  As a self-diagnosed recovering type-A control freak perfectionist, who doesn’t take herself too seriously anymore, she shares about the lessons she is learning as she leans more on Him and puts her faith in Him and His ways.  Her blog can be found at https://dewdropinsga.wordpress.com/

Share this:
It’s so easy to be consumed by the demands this world urges me to grab on to relating to this blessed season, which has been hijacked by the compulsion to prove something; that I’ve hosted the best parties, prepared the yummiest food, purchased the greatest gifts, strung up the most beautiful decorations, found the ugliest sweaters, created the most creative crafts, shared the wittiest elf-on-a-shelfisms (what in the world?!) Social media would have me believe I am failing and don’t measure up.