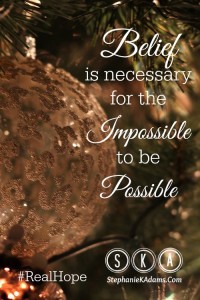 No tour buses make it to Shiloh. It is not considered to be safe. For Shiloh lies nestled in the troubled area of the West Bank in Israel.

A small group of us left our bulletproof vehicle and stood in the peaceful, wind-swept, desolate, stony landscape. There was nothing to fear. Ahead of us on an area of flat land a rectangle cleared of stones with a border marked by white rocks was visible. This is believed to be the site of the tabernacle mentioned in Joshua 18.

Joshua set up the tabernacle in this location after he defeated the Canaanites and claimed the land for the twelve tribes of Israel. The men and their families came to Shiloh to worship at the tabernacle. One of these men was Elkanah and his two wives, Hannah and Peninnah and her children.

We stood where Hannah prayed passionately for a baby and believed anything was possible with God.

Hannah’s belief in God’s action to make the impossible possible is recorded in her prayer in 1 Samuel 2.

Likewise, many hundreds of years later, Mary followed in Hannah’s footsteps. After being visited by the angel with the news she, a virgin, would give birth to God’s Son, Mary placed belief in the fact anything is possible with God. Her faith is documented in her song.

What did it take for these young women to believe anything was possible with God? What can we learn from them in this season of hope?

Hannah’s faith grew strong in the pain of barrenness and the torment of her rival. Likewise, Mary, with her world turned upside down, placed her confidence in God despite Joseph’s reservations, and the uncertainty of her condition in a traditional culture.

Hannah left the tabernacle no longer dismayed. She turned over the outcome to God and trusted his timing. Mary and Joseph abandoned their fears, stepped out in bravery and waited for their miracle to occur.

Belief is necessary for the seemingly impossible to be possible.

For nine months, as her belly grew, Hannah must have considered her duty to follow through on her promise and dedicate her baby to God for his work. Her responsibility was to follow through, and to teach Samuel about his important role. As she smelled his skin and watched him nurse, did she count the days until she would leave him at the tabernacle?

God intended Joseph to be like a father to Jesus and for Mary his mother to take care of him and nurture him in the Jewish faith. Joseph was also in charge of, as directed by the angel, leading Mary and the child Jesus to safety in Egypt, away from the threat of Herod so God’s purposes could come to fruition.

Obedience is required for everything to be possible.

“Do not be afraid,” the angel told Mary. The Bible repeatedly tells us not to fear. Yet antonyms to the word fear—assurance, confidence, comfort, contentment, encouragement, faith, joy—are more frequent in scripture.

Hannah and Mary focused on these aspects of God’s truth that became a source of their courage. Hannah’s prayer and Mary’s song are full of fearlessness. They are assured God guards the feet of his faithful ones and has done great things; confident because God is the Rock and holy and Mighty One; comforted and content because she who was barren has borne seven children; encouraged because his mercy extends to those who fear him; faithful in God my Savior; joyful as Hannah’s heart rejoices and Mary’s soul glorifies the Lord.

Courage is essential for anything to become possible.

Anything is possible with God but his seemingly impossible plans are always accomplished through our participation.

In this season of hope, what impossible thing is God asking you to believe in and be involved in? A Christmas miracle of healing or restoration? Hold onto hope. Your miracle could be around the corner.

Rachel Britton is a speaker, author of Prayer Zone Workout, and writes for her blog, RachelBritton.com.

This article is part of the #RealHope blog series and Hope Is Holiday Devotional Study.

For information regarding our current and future studies, visit our Bible study page.

Share this:
What did it take for Hannah and Mary to believe anything was possible with God? What can we learn from them in this season of hope?